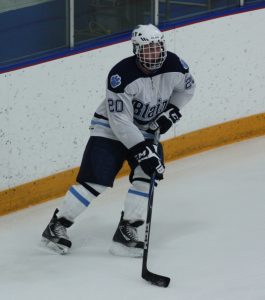 Brodzinski is the poster boy of what an offensive defenseman should be. He has good foot speed, is very agile, and he can wheel and deal with the best of them. Brodzinski possesses soft hands which allow him to maneuver around the opposition with ease. Much like his older brother Jonny, Michael possesses a cannon of a shot.

Brodzinski still needs to work out some consistency issues, as he has some problems with positioning and man coverage, but when Brodzinski is on his game, he’s defensively responsible and a force offensively.

Brodzinski had a very good season with Muskegon of the USHL, scoring 16 goals and 17 assists in 61 games, while being honored as defenseman of the week two times. Brodzinski is a likable prospects that should get some attention on draft day.