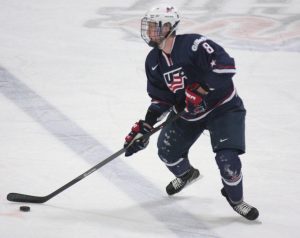 Since moving on from Benilde St. Margaret’s, Glover has continued to steadily advance his game with the United States Developmental Program. The tall and lanky defenseman has great skating ability that should only get better as he grows into his large frame. Glover has demonstrated some clever stick work in tight areas and has shown touch while making long range tape-to-tape passes.

Glover is an intelligent player as he evaluates his options very quickly and seemingly is always aware of his surroundings and potential dangers. Does not get rattled in pressure situations, instead Glover stays composed and makes the smart play. When in the defensive zone Glover applies tight coverage and does a good job taking space away from opposing players by keeping an active stick and good footwork.

Glover will have to make some diminutive improvements in his decision making as he occasionally pinches at the wrong time. Development in this area should be made has he gains experience. Glover is a prospect loaded with potential as he is a well-round player with top-end capability. For his age Glover is playing at an advanced level of play and at this point is considered the top Minnesota prospect available for the 2014 NHL Draft. If Glover finishes the season strong, he can expect his name called in the first round.